At plants that emit a number of pollutants, flue gas may go through a series of devices for cleaning. Flue-gas desulfurization (FGD) is a set of technologies used to remove sulfur dioxide (SO2) from exhaust flue gases of fossil-fuel power plants, and from the emissions of other sulfur oxide emitting processes such as waste incineration.

The Technical Guideline for Air Pollution Control, an administrative regulation to the German Federal Emissions Control Act, has long stipulated that only very small amounts of this pollutant may be released into the atmosphere.

For this reason, all of RWE’s lignite-fired power stations in the Rhineland were retrofitted with FGD units in the 1980s. RWE’s Niederaußem power station is a lignite-fired power plant with several such units. The site’s main goal was to increase plant efficiency and decrease SO2 emissions. They also wanted to avoid any unpredicted downtime or decrease in performance of the FGD towers. 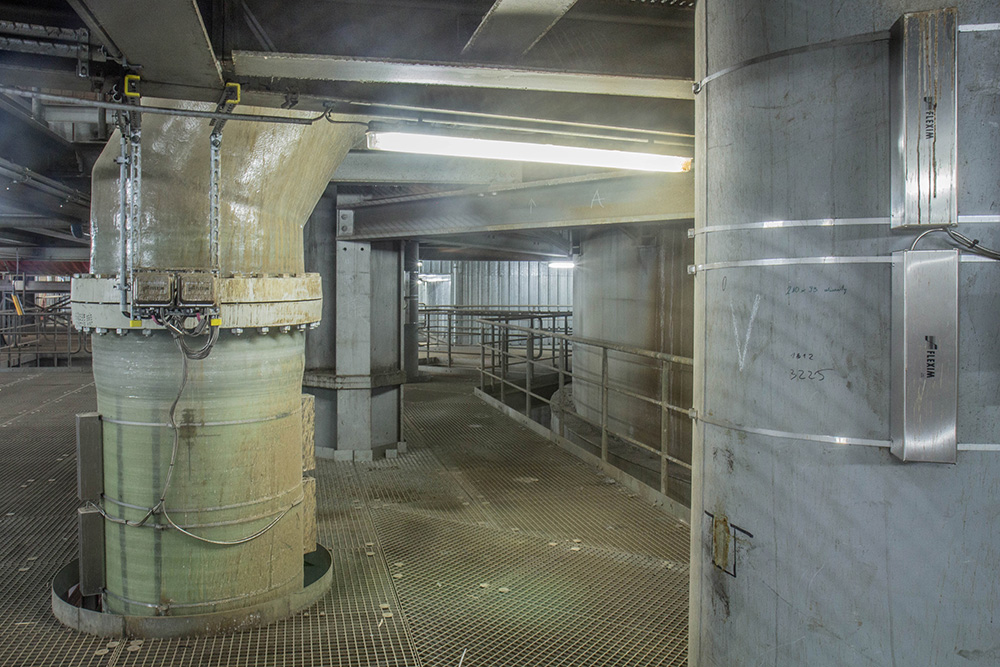 The absorber towers at the Niederaußem power station each have four to five pumps for circulation of a limestone-gypsum suspension. This medium, with a considerably high solids content, is highly abrasive and causes severe wear to the pumps and fouling and wear of the droplet separators. The particles cause clogging of the nozzles in the absorber, which can lead to decreased cleaning and pump performance and even unexpected failure of the recirculation pumps. A solution to monitor pump performance, detect clogging, and predict the need for maintenance was therefore sought after.

The installation of conventional wetted measuring technology, such as the magnetic inductive flowmeter, would have involved enormous financial, organizational, and technical costs. In addition to other factors, it would also have involved a shutdown of the pump lines for installation. Most significantly, the inline meters would have been challenged by the abrasive media. The gypsum limestone slurry damages the liners of the inline meters and leads to regular maintenance efforts. As a result, operation costs would be high to keep these meters running reliably. Given all these factors, the site engineers were, therefore, specifically looking for a non-invasive solution.

After a trial of clamp-on measurement technology from two different providers, FLEXIM’s CDK low-frequency transducers proved to be the best solution for a number of reasons. Installation took place during ongoing operation and required practically no effort compared to wetted measuring technology. There was no opening of the pipelines and no creation of flange connections for installation. FLEXIM’s non-invasive measurement technology proved to be permanently stable without wear due to the abrasive medium. As a result, RWE decided to retrofit all 37 recirculation lines with FLUXUS 7 series transmitters and CDK clamp-on ultrasonic transducers. Once again, non-invasive measurement from FLEXIM proves to be the ideal solution.